How can EFT help you?

Emotional Freedom Techniques can offer relief from just about anything ranging from exam stress to chronic pain.

There are clinical trials validating EFT for:

What is Tapping or Emotional Freedom Technique?

EFT operates on the premise that there is an underlying emotional component to every part of our life.  When this emotional component is out of balance or blocked, our body, or mind lets us know, through disease, pain, emotional and mental problems.  It is now common knowledge that any kind of emotional stress can impede the natural healing potential of the human body.  As well, when we are under stress we are more likely to contract disease and illness (stress suppresses our immune system) and make poor decisions.

In many cases, EFT can be applied directly to physical symptoms for relief without exploring any emotional contributors. However, targeting the related emotional issues and releasing them achieves the most powerful, longest lasting results.

By tapping on specific meridian end points, we clear blocked energy in the meridian tunnels and send calming signals to the brain (releasing the stress response or fight and flight response).  This in turn has the effect of bringing us back into presence, clearing brain fog, promoting clarity of thinking, sharper focus and better decision making and allowing our physical body the opportunity to come back into equilibrium.

By addressing and focussing on the problem or issue (talk therapy) at the same time as we tap on specific pressure points on our body, we release the emotions and any confusion or misconception around the issue, bringing resolution and acceptance and often a new perspective. (Many aha moments!) 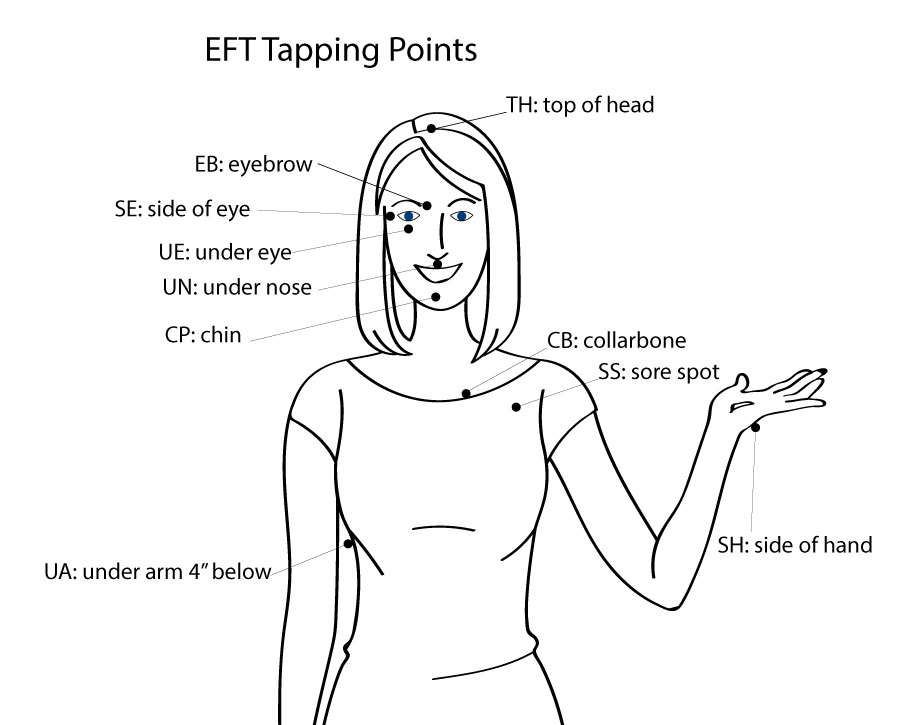 We have reactive parts of our brain that instruct physical, mental and emotional responses to information/events.

The response that our brain sends out in reaction to the information (stimuli) is governed by the perceived level of threat, which is determined from out learnings.  The majority of these beliefs are adapted or learnt before the age of 7.

These beliefs are learnt through observation and experience within our environment.  Parents, grandparents, caregivers, siblings, teachers, authority figures and I am tempted to add here television and social media.

If the information/stimuli is perceived as a low threat or relatively safe we react from the executive part of our brain, in a logical, thinking approach type way.

If the information/stimuli type is perceived as a threat to our safety we respond from the older parts of our brain, the limbic brain and stem cell, the thinking part of our brain is deactivated, and we react from our subconscious beliefs.

Emotions are made up or hormones.

What is the benefit in going back and revisiting memories?

In order for us to survive, painful and negative memories are split and stored in different parts in our brains.  That is why some memories seem vague and not complete.  Each of these memories or parts of memories have emotion/s attached to them. If the memory remains unresolved, we keep producing those negative or stress hormones attached to that memory, the memory keeps running or looping at a subconscious and sometimes conscious level, in time these hormones play havoc on our physical and mental bodies. By revisiting the memory and talking about it (addressing the negative) we allow the body to release those negative emotions.  By tapping at the same time we release positive emotions and calm the fear center of the brain creating a different or neutral response to the event.

Negative beliefs are supported by a number of validating events or teachings.  By working on and releasing the emotions on separate memories (events and teachings) we change our thinking around our beliefs and therefore our lives and actions/reactions.  If we release the negative learnings around memories that support the belief ‘I am not good enough’ we start to believe at a subconscious level that ‘I am good enough’, our actions and reactions will then validate this belief rather than the opposite.

Sometimes we are triggered by our senses rather than the thought or memory.

In days gone by our ‘fear response and the release of stress hormones was caused by real time physical threat’.  Being attacked by wild animals, natural disasters etc.

Nowadays our fear response is still triggered by these things (or sometimes the thought of these things) and also by modern day happenings that may or may not be relevant. Long work hours, financial worries, living in a confined environment, relationship worries, environmental worries, peak hour traffic, not enough time, poor sleep, lack of exercise, poor diet, raising a family, modern technology, a polluted environment, unhealthy foods, alcohol, financial stress, work stress, bullying and the list goes on……  Our brain and therefore bodies react to these as if they were a threat, firstly in a logical thinking type of way and if the ‘stress’ continues and is not resolved in an emotional/reactive type of way or ‘fight’ and ‘flight’ (leading to anxiety) and then into a ‘flop’ or ‘freeze’ a shutting or slowing down – maybe depression.

What effect can stress have on us?

With regard to negative emotions our ‘Emotional Bank’ operates in the opposite way to our ‘Piggy Bank’.

The healthiest emotional bank has few or no negative emotions in it.

Without regular maintenance small daily events like ‘the car that cut me off’, ‘the children not doing their jobs’, ‘my boss changing his/her mind’, ‘that upcoming meeting’, ‘those household chores’ ‘I don’t know how I’m going to pay my bills’ can very quickly add up to the ‘pressure boiler’ stage causing an overflow of emotion (an outburst),  a sense of overwhelm and not being able to cope.

To achieve this we need to acknowledge and release out negative emotions, which is often easier said than done.

Notice how your body reacts when anxious.

These are all physical bodily reactions from the fear response and unreleased fear response. The body has not been able to release the need for fight or flight and is being triggered by reminders.  These reminders maybe triggered by any or all of the senses.

Over 6,000 years ago, traditional Chinese medicine using acupuncture and acupressure in Japan developed under the premise that ‘disease is caused by disruptions in the body’s energy flow’.

Energy meridians were identified and related to various organs in the body.  Certain emotions can effect certain organs

As recently as the 1980s, Dr Roger Callahan developed his Thought Field Therapy, which is a combination of Dr George Goodheart’s Muscle Testing, and Dr John Diamond’s Behavioural Kinesiology (affirmations on acupressure points).  A unique tapping routine was formulated through a complex process of muscle testing for each emotional issue.

This was further refined in 1990 by engineer Gary Craig, who condensed these Thought Field Therapy tapping routines into one routine for all and Emotional Freedom Technique (EFT or tapping) evolved.

By using Gary’s technique, the client is able to cover the entire body with one sequence and can also easily learn to treat themselves.

EFT –  the Data and Affiliates

Listen to Bruce Lipton a cellular biologist on EFT

Loiuse Hay – author – You Can Heal Your Life

Barb is available Monday through Saturday.